The historic landmark building where the East Boston YMCA calls home is quiet. Its 2800 members remain at home and not at its Bremen Street facility or at its satellite location on Ashley Street. 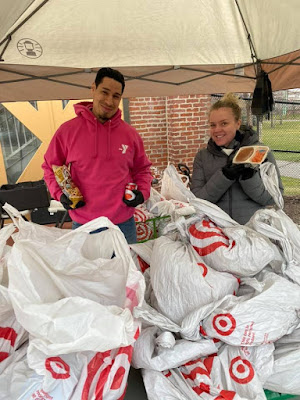 The exercise classes are gone, for now. So are the teenagers who check in over the weekend for programs. The applications for the Y’s summer camp are up for discussion. And so are the swimming lessons, the YMCA’s traditional staple, blocks away at the Umana Academy. Like many other social service agencies, the YMCA is facing a loss of revenues to support its programs.
But the YMCA is far from closed. And it is certainly not down and out. It is ground zero for providing community support in a neighborhood that is severely swamped by the COVID-19. According to the Boston Public Health Commission, East Boston has the highest percentage of coronavirus cases in the city.
The austere brick building which was once the Boston and Albany engine house and located along the Mary Ellen Welch Greenway has emerged a critical center of activity not only distributing food but also providing child care for front line workers.
“We’re the only child care facility in East Boston for front line workers for free of charge,” notes YMCA Executive Director and East Boston native Joseph Gaeta. Moreover, the Y is spearheading food distribution, along with the City of Boston and Project Bread, to make sure children and families receive healthy meals during the pandemic here in Eastie.
“A lot of our parents are doctors, nurses, EMTs, UPS drivers, Post Office employees and Stop and Shop workers. All of these workers are essential. Being able to provide our front-line workers a safe place for their children while they support our community is very important to us at the Y.”
Little did Gaeta know that he’d be leading relief efforts in a major health crisis in his hometown. “I worked my way through every job to be executive director,” he said. “I don’t ever expect to distribute personal protection equipment (PPE) and face masks.”
The YMCA has always stressed health and wellness in its programs. Some of the ones now in a holding pattern include not only the group and personal exercise routines but the LiveStrong programs for cancer patients and diabetes control. The transition to providing nutrition is natural for the East Boston YMCA.
Some of the Y’s members are still paying their dues so that they can keep the programs going. Members are aware their dues enable free programs to feed people. “They know the money is going to feeding children,” explains Gaeta. They are also busy making calls to check up on fellow members.
But unfortunately, the needs increase.
“Right when we think we have a steady stream to fill the need, it doubles the next day,” says Gaeta, “We serve about 20,000 meals a week just out of Bremen Street,” says Gaeta. 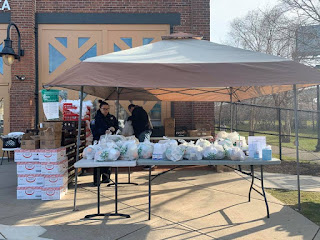 “Sometimes we run out and have to turn people away or refer them to another partner. Because of the generous donation from our friends at Cargo Ventures we are able to fill gaps and extend our reach to families directly when we do run out of our daily meals.”

Cargo Ventures, the industrial real estate and logistics firm, stepped up to the plate with a major donation to the Y just when the crisis broke. The Cargo Ventures donation enabled the Y to purchase gift cards for its members and the community.

“Cargo Ventures is pleased to help out this extraordinary organization,” says Pat Capogreco, the firm’s liaison to the community. “The staff members at the Y are working hard every day so that needy families in East Boston are fed. They are doing a tremendous job. As in East Boston resident and employee of Cargo Ventures, I am grateful that I can get help for the YMCA.” 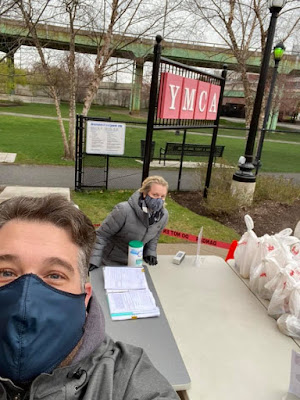 The YMCA is also using its resources to extend support beyond East Boston. Gaeta says its Ashley Street location has doubled up as a citywide kitchen staffed with two chefs that provide meals. The first chef also provides halal meals for East Boston’s growing Muslim population while preparing 200 to 300 meals each time he cooks. The second chef is working with the city of Boston to produce 500 meals not only for East Boston but Dorchester and Roxbury.
“It’s hard to figure out what’s next,” says Gaeta. He notes that the summer camp might take place during Phase 2 of the governor’s reopening plan and maybe some semblance of normality not much later for online fitness, perhaps as early as June 29. The summer camp program draws 300 local kids.
The agency supports a pre-school program for 93 children, weekly programs for 75 seniors and afterschool programs for 200 children.
Teleconferencing online has kept everyone connected and in shape. Members have access to virtual fitness options that are streamed live and archived for usage on-demand.

You can support the Y with an online donation here.

Mayor Janey weighs in on re-openings