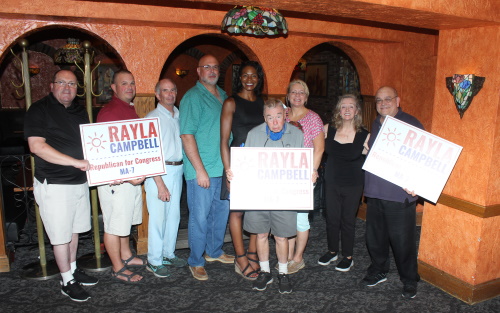 At its meeting on August 11th, the East Boston Republican Committee hosted the Republican candidate for Congress, Rayla Campbell.
Rayla is running as a write-in candidate for the Republican nomination in the Massachusetts 7th Congressional District.
Following a successful election campaign up to election day on November 3rd, Ms. Campbell will represent this district at the National level in Washington DC.  She is in stark contrast to the incumbent radical liberal policies of socialist Ayanna Pressley!
Rayla supports the right to bear arms under the 2nd amendment, a strong military support for the Veterans, National Energy Independence, and is a Pro-Life Candidate.   Rayla’s web address is:  RaylaforCongress@gmail.com
The meeting was chaired by Joseph Steffano, Chairman of the Boston – Ward 1 Republican Committee
Source: Joyce Kelly

A little old East Boston wisdom for our mediocre politics

New urban thinking: Taking a look at a 15-minute neighborhood

Change.org petition to save Columbus launched by local Italian-American activists