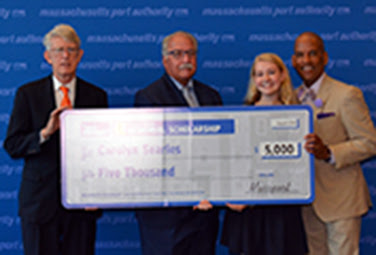 “We are very pleased to award Carolyn with the Donna Rauseo Scholarship. She has shown a commitment to following in Donna’s footsteps with her community service and we wish her the best of luck. Her commitment to the community as a volunteer epitomizes what we were looking for when we established the scholarship in memory of our friend and colleague Donna Rauseo,” said Massport CEO Thomas P. Glynn.

The $5,000 Donna Rauseo Memorial Scholarship is awarded annually to a female student who resides in East Boston. Ms. Rauseo was a graduate of East Boston High School and for more than 20 years was the executive assistant to Thomas J. Kinton, Jr. when he served as Aviation Director of Logan Airport and later as CEO and Executive Director for Massport.

Searles is a graduate of Boston Latin School. In the past, she volunteered with the East Boston Neighborhood Health Center Elder Service Plan and currently volunteers at her church. In her essay, Searles credited her volunteer work because it, “shaped my perspective on being around different groups of people… Through my education I hope to learn about and discover more ways in which to positively influence and impact people’s lives.” Searles will be attending Gordon College and is considering studying social work.

“Carolyn was a wonderful asset to the day program. Carolyn had a humble attitude while engaging with this population and was willing to do whatever was asked of her as a volunteer,” said Pat Bellone, Recreation Therapist for the East Boston Neighborhood Health Center.

To be considered for the Donna Rauseo Memorial Scholarship, students are required to have a minimum 3.0 grade point average and submit an essay of 1,000 words describing their career interests or how their community service has affected their outlook on life. Scholarship essays are judged by a committee made up of Massport employees and a representative of the Rauseo family.

Students interested in applying for the 2017 scholarship should visit www.massport.com/scholarships for eligibility requirements.

Historical Document: The 1966 legislation that expanded Massport and Logan Airport

Protesting over-development of luxury housing, Stand Up For Eastie takes to...