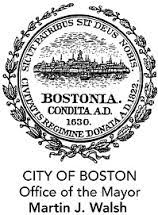 BOSTON – Tuesday, January 7, 2020 – Building on his commitment to ensuring Boston’s streets are safe, equitable and reliable for all, Mayor Martin J. Walsh during his State of the City address tonight announced the creation of an East Boston Transportation Action Committee.

“This year, we will build on our community planning in East Boston, launching a Transportation Action Committee to address the traffic challenges there,” said Mayor Walsh. “Transportation is crucial to ensuring our residents can get to their homes, their jobs and their schools, and my Administration will continue working hard to create the best transportation options for residents in Boston. I look forward to working with the East Boston community to make transportation better for all.”

In his speech, Mayor Walsh announced new efforts to reduce congestion and improve in Boston, including launching a Transportation Action Committee in East Boston to address the unique circumstances in the neighborhood. The committee will include local residents, advocates and stakeholders.

Since launching Boston’s safety plan, Vision Zero, the City has cut fatalities on Boston roads by half. Mayor Walsh again called for Boston to have a seat on the MBTA Fiscal and Management Control Board, noting Boston is the largest payer into the MBTA–but doesn’t have a voice at the table. In addition to this advocacy, Mayor Walsh urged Boston’s partners at the Massachusetts Legislature to take up transportation financing, and enable Boston to use Regional Ballot Initiatives (RBI) to fund its transportation initiatives.

Last year, the Boston Transportation Department resurfaced over 30 miles of roads, repainted over 1,000 crosswalks, rebuilt sidewalks, installed safety signage all throughout Boston, cut the ribbon on North Square in the North End, and broke ground on new streets and sidewalks in Roxbury. The Boston Transportation Department has also worked to improve active transportation options, improving bike connections from Jamaica Plain, Mission Hill, and the South End to downtown. Additional work includes rethinking how our connections operate, designing bridges in Charlestown, South Boston, Hyde Park and Long Island that work for everyone.

In November, Mayor Walsh announced a significant milestone reached on the implementation of the City’s Go Boston 2030 transportation plan, with more than half of the 58 projects and policies identified in the plan currently underway. The comprehensive plan was unveiled in 2017 and is designed to provide, by the year 2030, a safe, reliable and equitable transportation system that also supports Boston’s climate goals. In just two years, the Boston Transportation Department and its partners have made significant progress on their planning goals, designed to increase safety, accessibility, equity and affordability in transportation for all residents. Twenty-one projects are already in implementation and another 17 are in design.

Emerson Poll: The mayor’s race is getting tighter, especially for the second spot