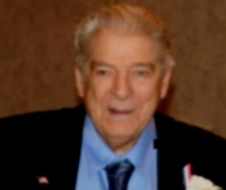 Born in 1926 in Boston, MA, he was a child of Sicilian parents who immigrated to the Boston area via Ellis Island around 1910. In addition to his parents, he was predeceased by his wife of over 60 years, Marie A. (“Jeanette”) Ferrino, his brother, Peter J. Ferrino, MD, and his sister, Annette M. Nazzaro.

Judge Ferrino was a World War II veteran, a Boston area attorney, a district court justice, a veterans organization leader, a patriotic organization founder, a beacon in the Italian American community, and a volunteer for hundreds of community causes and organizations.

A graduate of Boston University Law in 1951, Judge Ferrino returned to his roots to open a one-man practice in a brownstone law office in East Boston. There he served clients and became involved in several national causes until, in 1971, the Governor of Massachusetts appointed him a judge in the East Boston District Court.

In 1976, he was promoted to presiding justice of that court. Over the ensuing 25 years, Judge Ferrino stewarded his court into a unique community asset–a multi-dimensional community court complete with a totally unique in-court community medical clinic and a Boy Scout coeducational Explorer Post.

In addition, he also initiated Law Day in the Massachusetts courts. In 1989 the president of the Massachusetts Bar Association presented him their Public Service Award, calling his court “unparalleled in the state.”

In addition to his court responsibilities, Judge Ferrino was a member of the Massachusetts, North Suffolk, and Boston Bar Associations. He sat on the Executive Committee of the International Association of Jurists, the Governor’s Task Force on Juvenile Justice, and the Judicial Committee on Courthouses and Facilities. He also served as President of the Justinian Law Society and was recently named “Honorary Dean”.

His academic lecture and advising resume included Harvard University, the National Judicial College, the Massachusetts Bar Association, the University of Massachusetts, Brandeis University, Salem State University and numerous others. Many of these activities resulted in published scholarly work.

Beyond his legal career, however, Judge Ferrino lived a remarkable life in many other diverse fields. He entered the Merchant Marines and then later, enlisted in the U. S. Navy for the last 24 months of World War II. After the war ended, he attended college at the University of Alabama, and Boston University for law school. But he never lost his connection with veterans. He was a member of the Disabled American Veterans, the Italian American War Veterans, the East Boston Veterans Council, and most notably, the American Veterans–commonly known as the AMVETS. There, he commanded its local post, served as its Massachusetts Judge Advocate, co-wrote the national constitution and by-laws, and commanded its Northeast District. He went on to serve as its National Judge Advocate and its representative to international veterans councils in The Hague and Geneva. Finally, in 1968, he was elected its 25th National Commander and served in Washington, DC for a year.

He was also fiercely patriotic. Judge Ferrino founded the Bay State Chapter of Freedoms Foundation at Valley Forge. It became a major focus of his energies, particularly after retirement from the bench in 1991, and he served in multiple offices, including president. His work in building the group from scratch ultimately provided hundreds of young people an immersive U. S. policy and education experience at the Freedoms Foundation national education center in Valley Forge, Pennsylvania even as his local chapter served Massachusetts as a cornerstone organization in public affairs and traditions.

Judge Ferrino’s role in the Italian American community was legendary. Over the decades he served in every leadership role in the Dante Alighieri Society of Massachusetts. He was instrumental in building the cultural center in Cambridge, MA. In 1998, working closely with the governor, he was instrumental in establishing the annual October Italian Heritage Month in Massachusetts. He maintained active membership in a plethora of Italian American organizations his entire life. He also worked closely with the Italian Consulate in Boston, hosting and supporting a number of consuls general and their work in Massachusetts and New England.

Judge Ferrino’s U.S. and International awards and decorations were myriad. He was knighted by the President of the Italian Republic as Commendatore dell’Ordine della Stella della solidarietà italiana (A Commander of the Order of the Star of Italian Solidarity). In May 2016, Freedoms Foundation presented him its highest national award, the “Spirit of ‘76” medal and, in 2018, the Massachusetts State House of Representatives honored him for his “collective body of work” on the Italian Heritage Month Committee. In 1989 he was honored with a Grand Knighthood in the Order of Saint Michael the Archangel of the Massachusetts Italian American Police Officers Association. He held awards and recognition from every level of the Massachusetts Bar and countless other organizations.

Arrangements are being made through Caggiano Funeral Home of Winthrop, MA. In view of the national health emergency, memorial and interment services will be held privately for the immediate family only. A retrospective public celebration of life is contemplated for some later date when safety can be assured. Friends wishing to make a memorial gesture are encouraged to donate to the American Diabetes Association.

A tribute to John White: A great man no longer walks among us

R.I.P. Tony “The Kid” Barrasso, WWII veteran of the Battle of the Bulge, passes away at 103

August 11: Southie to Eastie — An interactive look at changes...

Freedberg: Why the T Cannot Ever Be Completely Fixed

Everyone can now get tested at EBNHC